Posted by Brianna Noll on August 7, 2013 in Uncategorized

In Image, Music, Text, Roland Barthes argues that language does a pretty poor job of discussing music. We’re limited to adjectives that essentially affirm the position of the listener, rather than really saying anything about the performer or the performance. If we struggle against the adjective, he says, we can approach a space that exists between music and language, a space he calls the grain. The grain of the voice in particular is used to describe this space in a voice that produces both music and language–a singing voice. He says:

The ‘grain’ is the body in the voice as it sings, the hand as it writes, the limb as it performs.

The body in the singing voice. It’s hard to think of this in anything but abstract terms, and Barthes tries to describe it using examples from classical music. But I think I’ve found my own example, in the isolated vocal track for Queen’s “Under Pressure.” Listen here.

Right?! The grain of the voice(s).

(I’ve totally skimmed over much of Barthes’ argument, but that wasn’t really the point of this post).

田んぼアート (tanbo art), or “rice paddy art,” is made like a paint-by-numbers, except instead of painting, the artist plants different varieties of rice. (Rice is a cereal grain, in case it was unclear how this fit the subject of today’s post). Check out this article on Kotaku. Some of my favorite examples of tanbo art are meta, replicating famous paintings, like these: 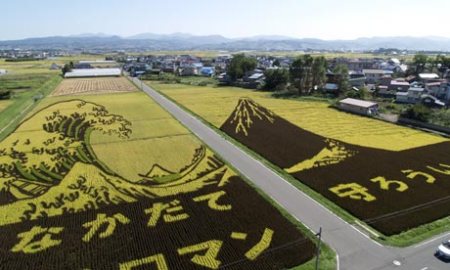 Funny how the Internet presents patterns and connections you hadn’t noticed before, like the many ways in which “grain” can refer to art. Like as not, I’ll find more examples, and I’ll make this post the first in a series.